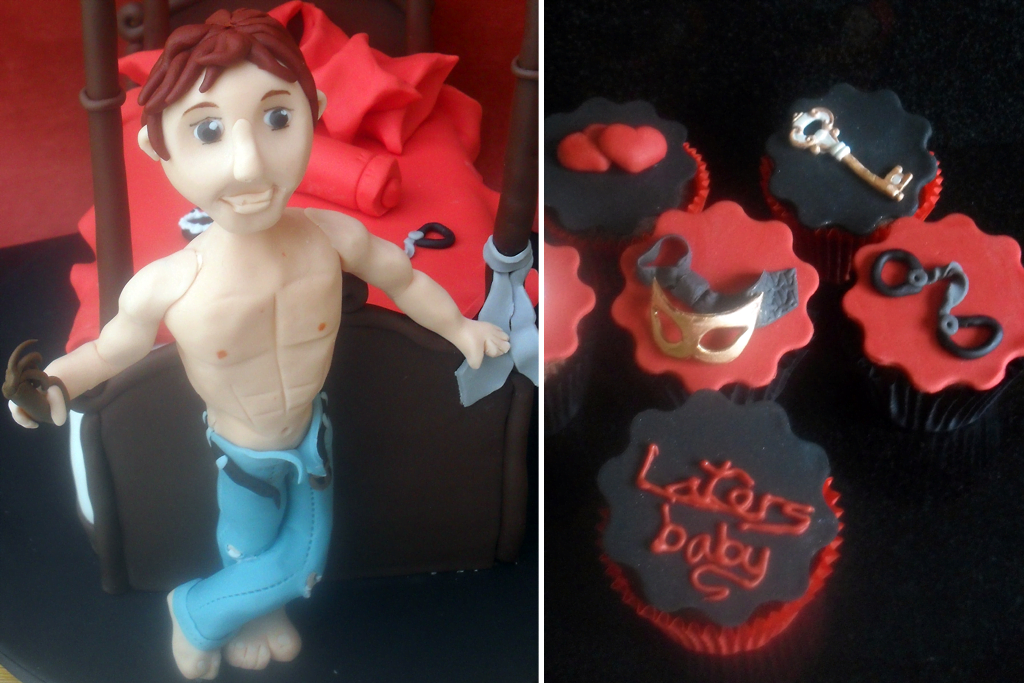 You’ve read the book (ok, so you might not admit it!) and now the film is about to be unleashed upon us.  As with all great things you know there has to be a cake version!

You’ve probably seen all sorts of 50 Shades of Grey type cakes or cupcakes on Facebook, Pinterest and Google, but the best has to be the one designed by Emma Ball from Richard’s Cakes, Manchester.

Here at Bluebell Kitchen, we had the chance, not long after the book was published to attend her 50 Shades masterclass!  It was a brilliant, mad and hilarious day, the result of which was our version of this amazing design complete with a handmade model of Mr Grey himself aka Sir!

At 10 am we started the day with a few blocks of sugar paste and by 6 pm we had made and iced a delicious “bed” cake including edible sugar pillows, handcuffs and the infamous grey tie.  Then there was Mr Grey himself.  What can we say.  He was completely handmade out of sugar too and of all the cakes we have made this one is always the talking point!

It turned out that half the class had never read the infamous book including Erica, who still has no plans to!

We took Mr Grey along to a Wedding Show shortly afterwards and he was definitely the star of the show.  In fact, because of this cake we were invited to be the preferred wedding cake supplier to The Hop Farm.  We would also like to think that our other cakes at the Show weren’t bad either.

We are sure that when E L James wrote the book she never imagined that someone would come up with a cake version, but thanks to Richard’s Cakes even we at Bluebell Kitchen have got in on the act.  We went 50 Shades crazy adding a whole selection of cupcakes too.

Enjoy the film and let’s see what the next big trend for turning into a cake will be?